How many watts can a dimmer handle in normal conditions?

Dimmer switches can handle bulbs from 1 Watt to 1000 Watts.

Some dimmers can even handle different bulb types in the same circuit.

Not all dimmer switches are the same, and if you get one that’s not rated for the total wattage of the lights you want it to control, you could have problems. So bu sure to check the fine print before you buy it. And if you decide to replace an old dimmer, make sure the wattage rating on your new dimmer is at least as high as the old one.

If you’re planning on installing a dimmer switch, you should keep in mind that each switch is rated to handle a maximum wattage.
If you’re trying to dim five 100-watt bulbs, use a switch rated for at least 600 watts.

An easy rule to remember when calculating the load for LED dimmers is to divide the stated (on the dimmer or the package) maximum load by 10. For example, a 500W dimmer switch should have no more than 50W of LED bulbs connected to it, which would equate to 10 5W bulbs.

Has This Ever Happened To You?
You have done your homework and confirmed that the dimmer you have just purchased is compatible with your LED bulbs.
Now comes the time to test out the performance and you’re not getting what you were expecting.
This is because compatibility is just one part of the dimming equation.
The dimmer you have has several electrical requirements that must be met in order to ensure good performance.

A couple of these requirements are minimum and maximum loads.

Dimmers also have maximum load requirements to ensure the load does not exceed the dimmer’s design limits.

The low wattage of LED bulbs means that in theory, you could connect numerous bulbs to the same dimmer switch. If you have a dimmer switch with a 400W maximum load, for example, then surely you could connect 40 10W LED bulbs to it (40 x 10W = 400W)? Well, it`s not exactly like that.
LED bulbs generate a spike of power when switched on, which may surpass the stated wattage of the bulb for a moment.

A rule of thumb commonly used to calculate a load for LED dimmers is to divide the stated maximum load by 10. For example, a 400W dimmer switch should have no more than 40W of LED bulbs connected to it, which would equate to ten 4W bulbs.

What can happen if you surpass maximum loads?

You may be asking why?

It’s because if the LED load isn’t using enough current to keep the dimmer’s switching elements closed, the dimmer will have irregular behavior. This behavior can include flickering, bad dimming range, flashing when off, or not even working at all.

Dimmers that are designed for LED loads normally have a much lower minimum load requirement and usually, only require one or two fixtures. The LED minimum load rating for LED loaded dimmers is usually given in the number of lamps instead of Watts (W) or Volt-Amps (VA).

Lutron C.L Dimmers can control up to 17 bulbs and is the only dimmer UL listed to control mixed loads (different types of bulbs, such as LEDs and halogens, on the same circuit). 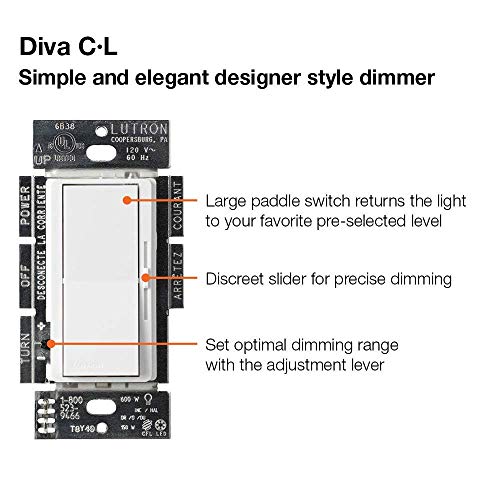 Even when meeting the load specifications, flicker may still appear if you are trying to dim lower than the rating of the LED driver.

Adjusting the low-end trim of the dimmer can usually fix this.